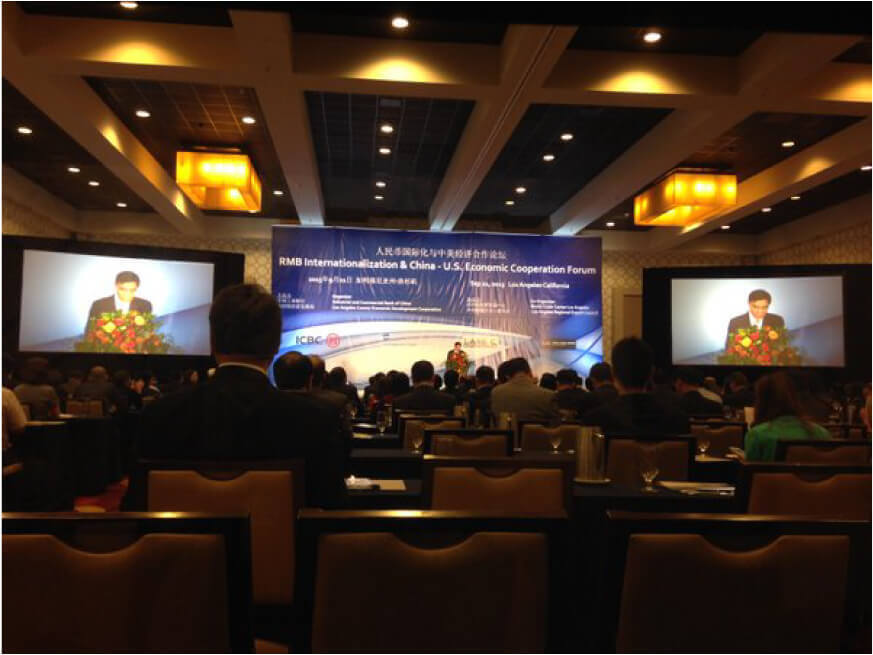 Our Ko & Martin team provided simultaneous interpretation services at the RMB Internationalization and U.S.-China Economic Cooperation Forum Organized by Industrial and Commercial Bank of China, Los Angeles County Economic Development Corporation, World Trade Center Los Angeles and Los Angeles Regional Export Council, Los Angeles, California, September 2015. Due to the size of China's economy and the large volume of its exports, the RMB’s role in the international monetary system is growing in importance.  Internationalization of the RMB necessitates greater liberalization of China’s monetary policy. Recognizing RMB as a global reserve currency acknowledges China’s ascendancy as world economic superpower and will boost China’s efforts to project its power internationally. It will also give China increased leverage, especially in Asia and make the U.S. rebalance to Asia much more difficult.  The implications of the RMB as an emerging global currency is less with the ascendancy of the RMB and more with state of U.S. global economic leadership. China has a long-term plan to supplant U.S. global leadership and is executing it regardless of short-term distractions.  Nevertheless, a strong U.S. economy is the foundation for a strong U.S. foreign policy. The RMB becomes much less of an issue with an U.S. economy growing at 4 percent a year.